The newest social networking Giant on the block, Stickam, has captured the trend of the 14 to 30 year old users that are enamored with everything social networking. A combination of Skype and MySpace rolled into one, Stickam has the MySpace community feel but with the added feature of personal live video chat rooms.

You can set up a room and broadcast your web cam to the public, indeed many users have set themselves up as DJ’s, Talk Show hosts, game reviewers, even celebrities of the likes of Leo Laporte and Danny “come on get happy” Bonaduce have found Stickam to be a great vehicle for delivering their content, whilst tapping into a potentially new audience.

Stickam has a subculture all of its own, on forums around the web you can read all about the drama some users have with each other, it plays out like a soap opera, quite a few users have almost star status, with loyal followings and niche “in groups” being followed by wannabes. The cult of personality is a live and well on Stickam.

Just like many social networking sites, you can paruse a list of user stickam chat rooms and if they have their status set to “public” you can join in the conversation, broadcast your own web cam, or like the majority just sit, lurk, listen and watch the video. 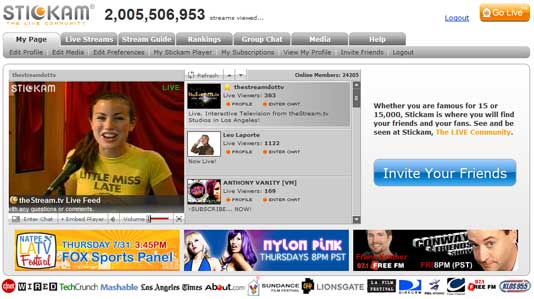 Unsigned (and for that matter signed) bands use Stickam as a forum to get their music “out there”, with many holding parties, and live launch events on web cam.

Stickam attempts to protect its minors and more private folks by allowing users to set an age limit to enter their video enabled chat room, as well as the ability to chat in private with invited guests only or set the room to be only available to friends.

Your personal page acts much like MySpace along with your profile you can upload images, video, music,choose from a variety of stickam layouts and each page contains a message board where friends or visitors can drop by and leave you a note.

Stickam is a great place to meet all manner of people and hang out, form friendships, be educated and entertained.

If you’re not in the “in crowd” or you are over 30, you will find the user moderated rooms will often have over zealous moderators that will kick you for no particular reason, but as the agenda of the room is set by the participants this is fair enough I feel.

Easy to setup and get broadcasting, Stickam also allows you to easily embed the Stickam web cam player in your own web site.

IN SUMMARY Stickam is a great place to hang out, the topic of conversation is often more entertaining than some of the other web cam communities on the net, some of the Stickam entertainers are very good indeed, whether you want to catch up with the latest tech news, listen to “crank yankers” style prank calls, listen to an up and coming band or just shoot the breeze.

Having said this if you are over 35 Stickam can be a lonely place, the content (conversation topics etc…) may not suit your tastes and you may be struggling (at this stage anyway) to find a community of your own to become a part of. Add to this the very real concerns about protecting our younger folks (Stickam does have moderators but these seem to visit fairly infrequently) forces us to bring the score of Stickam down a touch.

Check out this Youtube clip to see what ovguide.com has to say about Stickam

Take a look for you self and let us know what you think! Stickam

Warning Stickam can be a very addictive time sink!