Windows Live Messenger, the latest incarnation of what was known as msn messenger, is possibly the most popular Instant Messenger if we go simply by weight of number of users. Due to the large amounts of production resources (time and money) that have been able to be funneled into Windows Live Messenger you would expect it to be a great piece of software, which for the most part it is.

From a video chat point of view, Windows Live Messenger almost has it all.  With true live video and fast frame rates Windows Live messenger is arguably the best video experience in a program of this type. You can pc to pc call with your friends by simply clicking their user name and inviting them to view your cam. Windows Live Messenger doesn’t appear to be as “buggy” as Yahoo! Messenger in that the video doesn’t appear to get interrupted, stutter or drop out as much as its main rival yahoo does.

Windows Live Messenger video “windows” are re sizable and like yahoo have a “sticky” feature so you can have a small video window open, always on top of all other windows. This enables you to watch video while you work or do other tasks on your pc without having to swap windows all the time.

So why did I say “almost has it all” is because it is lacking one very important feature, well rather it has removed one very important feature!. The feature I’m referring to is chat rooms. Back in the day when Windows Live Messenger was still known under the title “msn messenger” it had the best multi-user voice and video enabled chat rooms that we have seen to date in a free service. The chat rooms were bustling with a huge array of users from all walks of life, you name it you could find it in terms of subjects discussed in user created chat rooms.

I hear you ask, “so why did msn get rid of chatrooms?” the answer sadly is due to the amount of abuse that was going, whilst we acknowledge adult, cybersex activities in chat rooms is a big component of online chat, there is no place for exposing minors or even subjecting those who would rather not be subjected to nudity and adult themes. The job of policing these rooms and the threat of possible litigation was just to large and Microsoft removed the rooms totally.

It is sad that rater than try to fix them they opted for the easier option of shutting them down and while Yahoo Messenger chat rooms are now over run with spam at least they haven’t removed them altogether (although unfortunately for similar reasons they removed user created rooms). 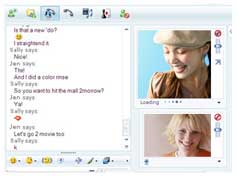 I believe the messenger program that finds the solution to this problem and brings back user defined video chat rooms will ultimately come out on top. Whilst its great to be able to talk with those you know, its alot of fun to be able to meet someone in a chat room and instantly see who they are.

For this reason subscription programs like Paltalk are becoming more and more popular, users can create a room relating to whatever subject they want.

Windows Live Messenger has interoperability with yahoo users, so you can talk with them without having to have both applications open.

Currently Windows Live Messenger is a leader in the free video chat enabled Instant Messengers pack, they loose some points for no chat room but pick up some for the excellent quality of video and voice along with a huge user base.